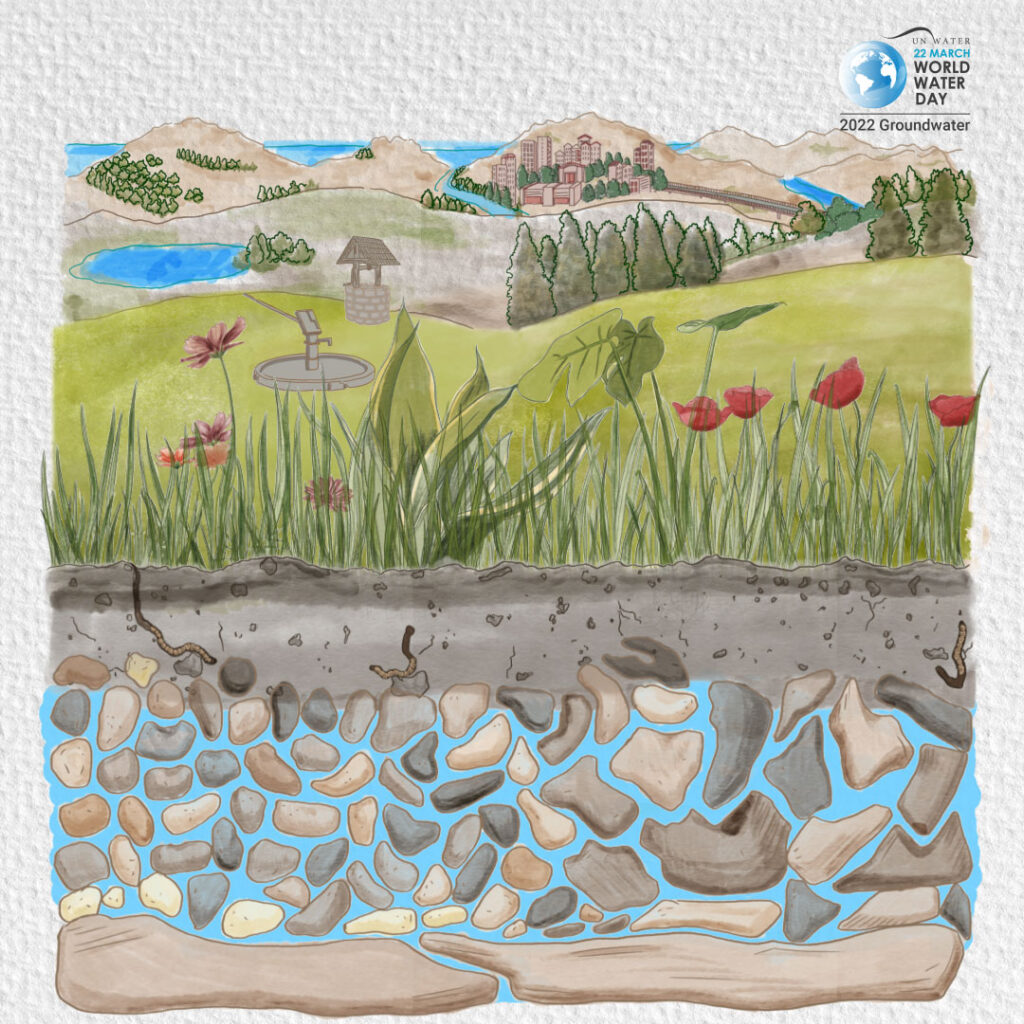 The theme for this year’s World Water Day is‘ Groundwater –Making the invisible visible’  This spotlights the hidden water resource which has always been critically important to humans, societies, and ecosystems but hasn’t been fully recognized.

UN World Water Development Report published by UNESCO launched today,  21st March 2022, states that Groundwater accounts for 99% of all liquid fresh water on Earth and that globally, water use is projected to grow by roughly 1% per year over the next 30 years. Our overall dependence on groundwater is also expected to rise as surface water availability becomes increasingly limited due to climate change.

Here are a few pointers to help you understand this invisible but incredibly significant natural resource.

Groundwater is water found underground in aquifers, which are geological formations of rocks, sands, and gravels that hold substantial quantities of water. Groundwater feeds springs, rivers, lakes, and wetlands, and seeps into oceans. It is recharged mainly from rain and snowfall infiltrating the ground and can be extracted to the surface by pumps and wells.

Why is groundwater important?

Almost all the liquid fresh water in the world is groundwater. Life would not be possible without groundwater. Most arid areas of the world depend entirely on groundwater. Groundwater supplies a large proportion of the water we use for drinking, sanitation, food production, and industrial processes. Groundwater is also critically important to the healthy functioning of ecosystems, such as wetlands and rivers. Overexploitation of groundwater can lead to land instability and subsidence, and, in coastal regions, to seawater intrusion under the land.

Why should we care about groundwater?

Groundwater is being over-used in many areas, where more water is abstracted from aquifers than is recharged by rain and snow. Continuous over-use leads eventually to depletion of the resource. Groundwater is polluted in many areas and remediation is often a long and difficult process. This increases the costs of processing groundwater, and sometimes even prevents its use. In other places, we do not know how much groundwater lies beneath our feet, which means we could be failing to harness a potentially vital water resource. Exploring, protecting, and sustainably using groundwater will be central to surviving and adapting to climate change and meeting the needs of a growing population.

What can we do about groundwater?

Groundwater has always been critically important but not fully recognized. We must protect groundwater from pollution and use it sustainably, balancing the needs of people and the planet. Groundwater’s vital role in water and sanitation systems, agriculture, industry, ecosystems and climate change adaptation must be reflected in sustainable development policymaking. Under the SDG 6 Global Acceleration Framework, particularly in the areas of innovation, governance, data and information, we need to see urgent action in relation to groundwater.